Stay inside where it’s warm and enjoy these Snowball Fight Cupcakes this winter. These treats are so easy to make using modeling chocolate and they taste great too. 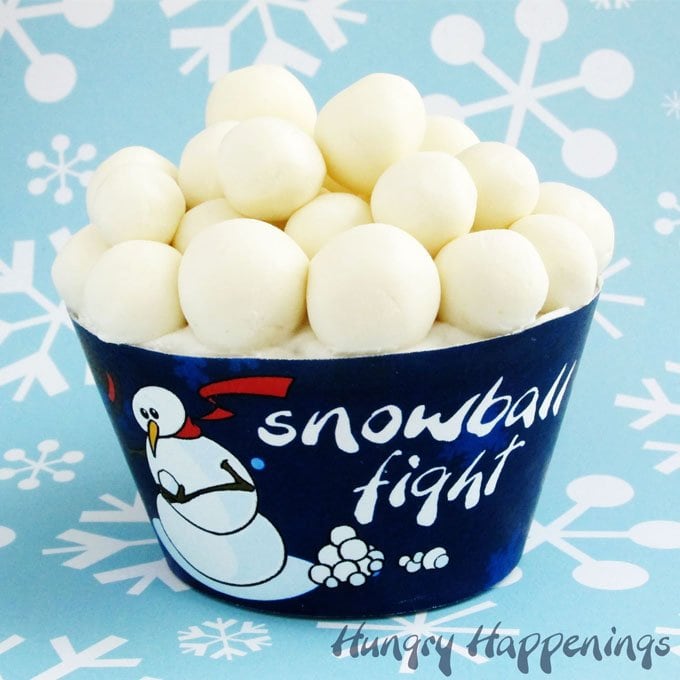 Winter has finally arrived here. The temperature fell more than 30 degrees in one afternoon down to 20 degrees Fahrenheit and the snow began to fall shortly thereafter. We haven’t seen much of an accumulation in the past two days; only about a half and inch has fallen thus far. I suppose if I really tried, I could scrounge up enough snow to form a few snowballs, but I’d rather just stay inside and make them.

Over the past year, I have racked my brain trying to think of a clever decoration to top a cupcake and finally came up with one. It is hard to believe but this is the first cupcake posted here on Hungry Happenings. This post isn’t about a new great cupcake recipe; you can use whatever cupcake and white frosting you like.

I’ll admit when it comes to dessert, I’d pick almost anything over a cupcake. That is another reason I just haven’t been inspired to make cupcakes for this blog. I did eat one today, but will probably freeze the rest. Maybe having them lurking in my freezer will remind me to think of more decorating ideas. 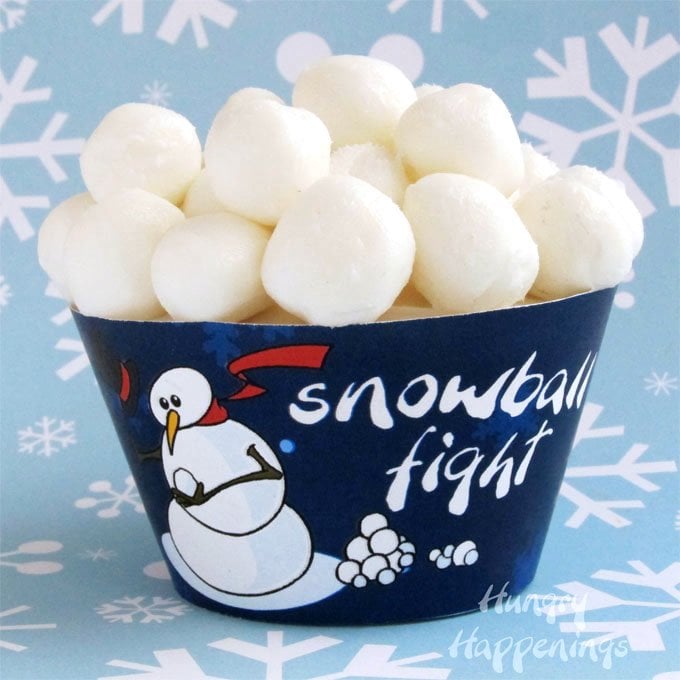 Recently, I’ve seen some really cute indoor snowball fight crafts around the web and was inspired to transform that idea into a cupcake. I started by designing a cupcake wrapper for my snowball fight.

Then I spent hours trying to decide what to use for the snowballs. Of course I knew modeling chocolate snowballs would work, but I really wanted to use something else. So, before I made the cupcake pictured above with modeling chocolate snowballs, I experimented with a few other things. None of these ideas worked well: cotton candy (melts down to nothing after being exposed to air for about an hour,) white chocolate covered Peanut Butter Cap’n Crunch cereal (made them but they were actually way too sweet,) and tiny little cake balls (started to make them but thought they were way too much work.)

One experiment did actually worked great. I froze some white frosting, scooped out small amounts of it,  rolled it into snowballs, and topped the cupcake with a pile of them. I figured most cupcakes these days are topped with a tower of frosting, so this frosting snowball covered cupcake, pictured above, would taste about the same.

Either way you make them they are sweet and pretty easy to do.

If I would have wanted to brave the cold  to do some shopping today, I may have been able to find other snowball options. On-line I was able to find white malted milk balls, yogurt covered blueberries, and yogurt covered pretzel balls. All of these options would add a textural component to the cupcake that might make them a bit challenging to eat.

Of course you could just eliminate the cupcake all together and print the cupcake wrapper, wrap it around a cupcake liner, then fill  them with any of the above. I do think that is a great option, but then that would, however, defeat the purpose of me trying to share a cupcake idea with you. 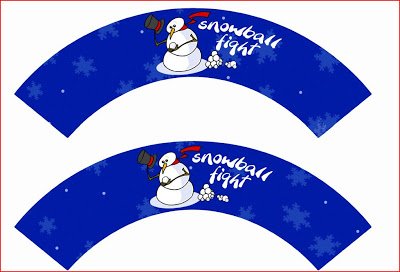 Download the cupcake wrappers. Print them out on white card stock. Cut out. 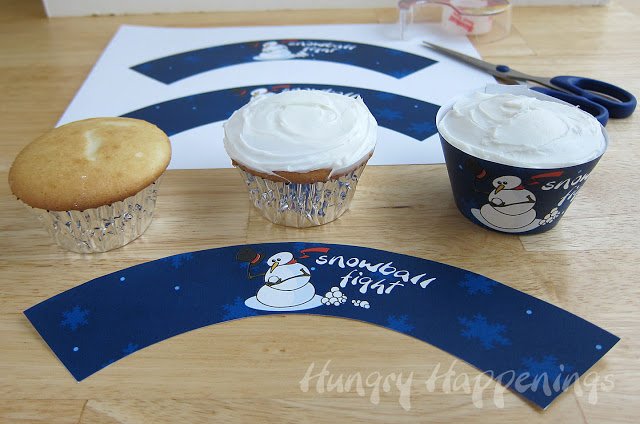 Frost your cupcakes with a very thin layer of white frosting. Wrap each cupcake with a snowball fight wrapper taping the ends to secure them.

If using any of the alternate snowballs, just pile them up on the cupcake. You can use a small amount of frosting to hold the candy in place at the top of the pile, if necessary. 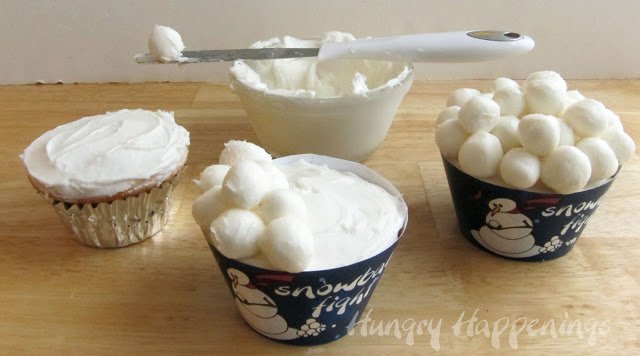 If using frosting snowballs, spread frosting in a thin layer in a bowl and set in the freezer for about 30 minutes, until it is stiff enough to roll.

Scoop out small amounts of the frosting, roll into balls, place on top of a cupcake. Continue until you have a nice pile of snowballs on top of each cupcake.

Note: you will need to wipe your hands clean after each ball you roll. I wet a few paper towels, bunched them up, and used them to wipe off my hands in between each. The slight amount of water on my hands helped to keep the frosting snowballs smooth.

Update: I let one of these frosting snowball cupcakes sit at room temperature over night and in the morning the snowballs looked great. I ate it, enjoyed it, and have to say that of all the possible methods to make these, I think this is the best. 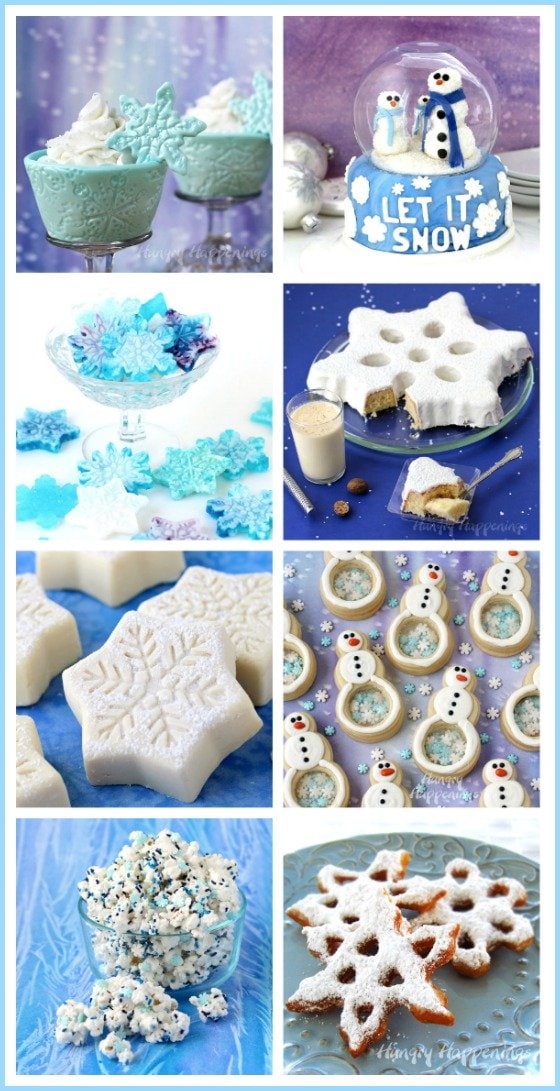 If you recreate these Snowball Fight Cupcakes
be sure to link to this tutorial and send a picture to beth@hungryhappenings.com,
so I can  share it in my Readers’ Gallery.

Be sure to check out all my fun Christmas Recipes! 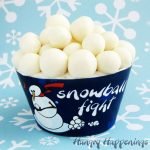 Previous Post: « Sweet Snowflake Doughnuts will warm you up when it’s cold outside.
Next Post: Chocolate Penguin Box filled with White Chocolate Snowflakes »