Ring in the New Year’s by serving this cheesy Skillet Pizza Dip Countdown Clock loaded with pepperoni and bacon. The four cheese dip is surrounded by 12 cheese filled pizza puffs each decorated with a number on a clock and makes the perfect appetizer for your New Year’s Eve party. 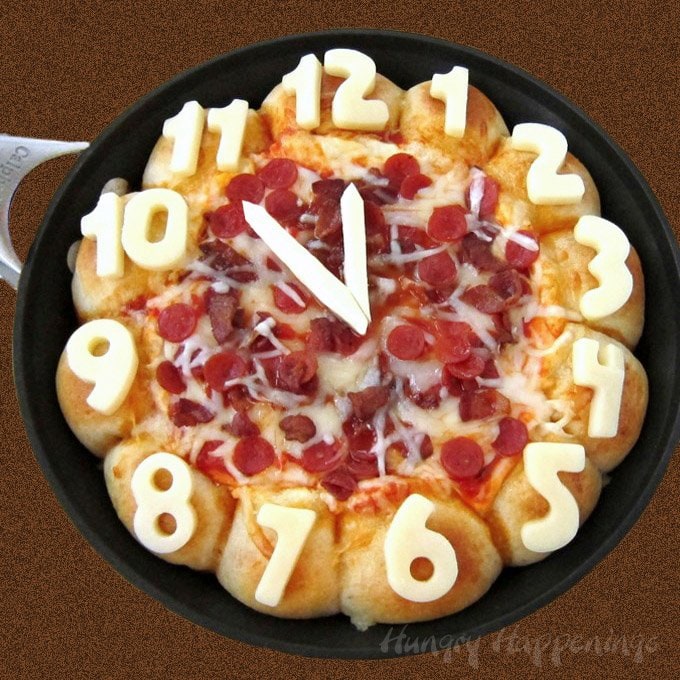 What are your plans for New Year’s Eve?

Hopefully, I’ll be in my p.j.’s watching a movie, maybe even asleep before midnight.

Boring, maybe. But, I’m so tired and have been going non-stop all year long. It would be nice to start the new year a little more rested.

We had 5 days of non-stop parties this week, and I made this Skillet Pizza Dip Countdown Clock for the game night we attended last night. It was a hit.

The dip is loaded with four different cheeses, bacon and pepperoni, plus the pizza crust puffs that surround the dip are filled with cheese too.

Your party guests can easily break off a cheese filled pizza puff and scoop up some dip.

There’s just the right amount of dip to bread ratio and it stays nice and hot because it’s baked and served in a skillet.

You can use a non-stick skillet or a cast iron skillet to make this dip. Just be sure your skillet is oven safe with a heat proof handle. My skillet has a metal handle so when I pull it out of the oven I cover it with a silicone grip so that no one burns themselves on the handle. 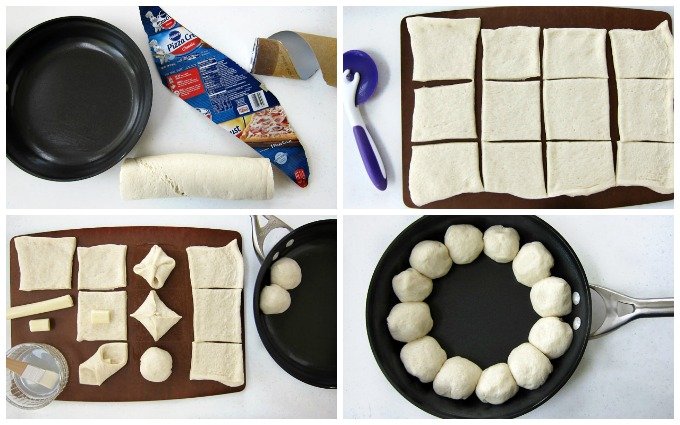 To keep this recipe quick and easy, use Pillsbury Pizza Dough. Unroll the dough and cut it into 12 rectangles. Brush egg wash over the dough.

Cut 3 string cheese strips into 4 equal pieces and set one piece on each rectangle of dough.

Pull the dough up over the cheese and pinch together the seams. Roll dough into a ball then set it into a buttered 10 inch oven proof skillet. Repeat, putting all 12 dough balls around the edge of the skillet. 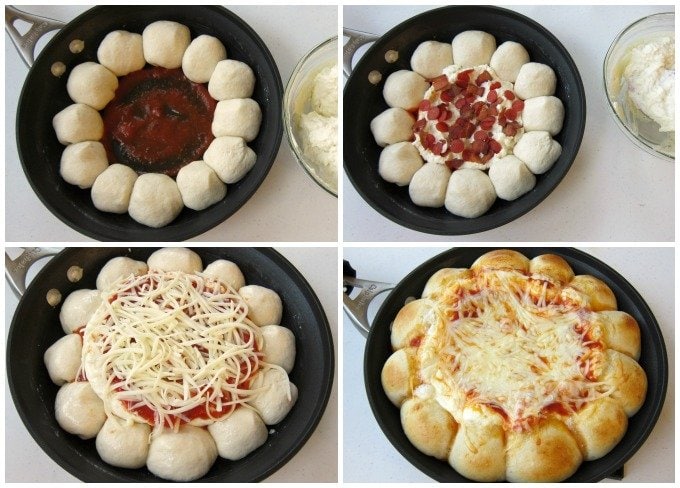 You’ll add the rest of the ingredients after it bakes for a while. If you add them now, they’ll ooze out over the pizza puffs and wont look very nice.

So, bake the dip for 25 minutes at 350 degrees Fahrenheit. 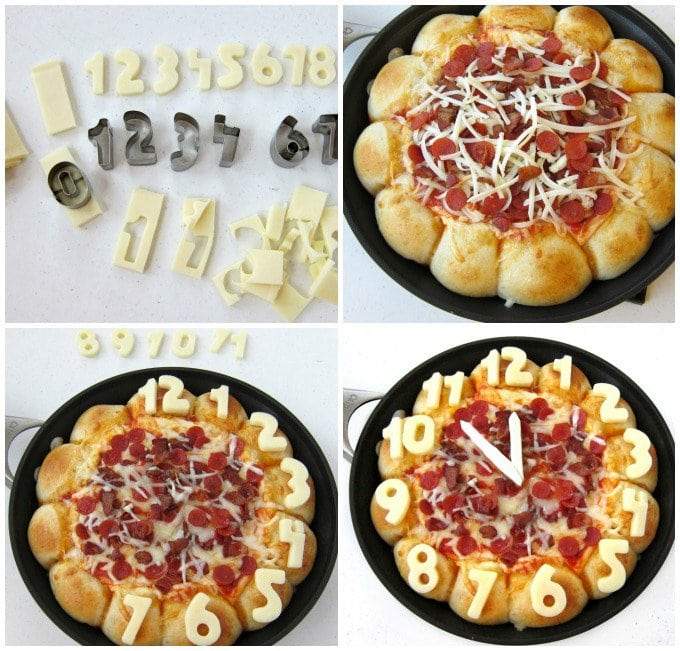 When the dip comes out of the oven, top with the remaining sauce, shredded mozzarella cheese, bacon, and pepperoni. Bake for another 7-10 minutes until the cheese is bubbly and the pizza puffs are deep golden brown and are baked through.

While that is baking, cut numbers out of slices of mozzarella cheese and arrange them like a clock on top of the pizza puffs. Cut one hour hand and one minute hand out of cheese and place in the center of the dip so that the clock looks likes it about the strike midnight. 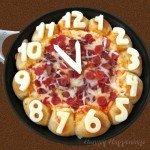 For more fun New Year’s Eve Appetizer and Dessert Recipes, check these out… 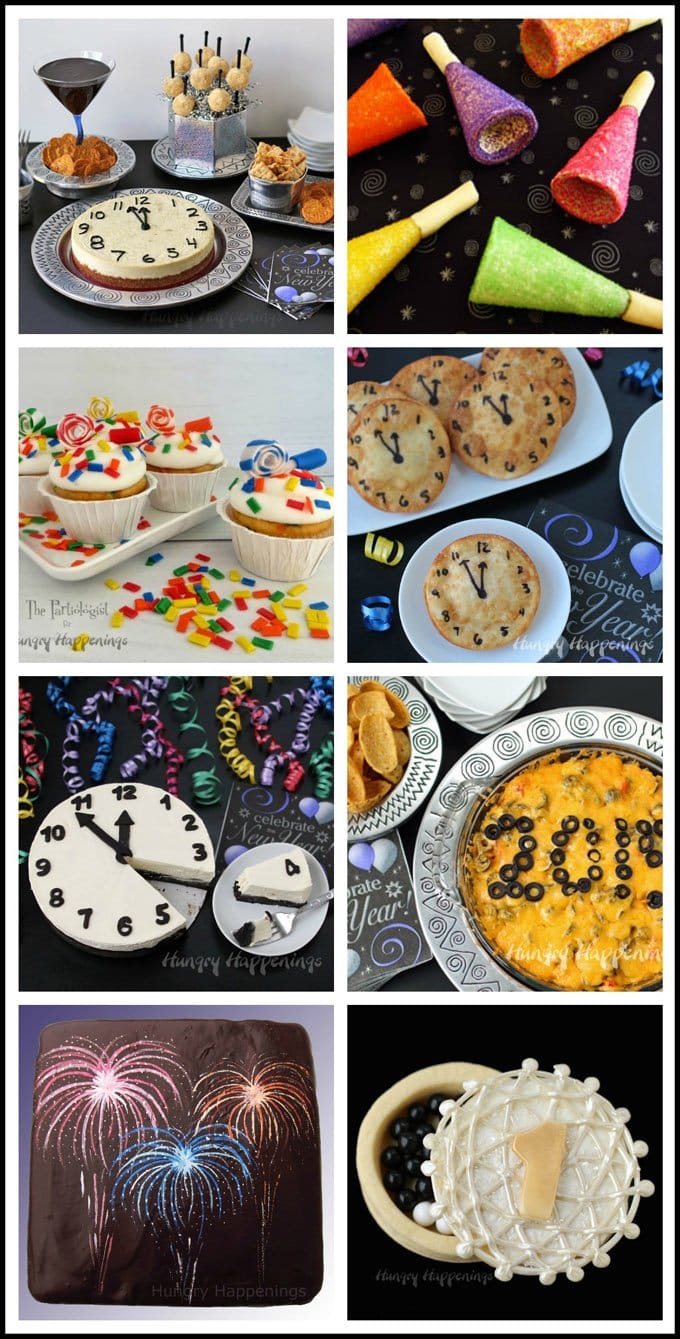 Have a Happy New Year and enjoy your Skillet Pizza Dip.