Before you scroll down the page, can you guess the surprise that’s hiding inside this
Eagle Scout Reveal Cake? 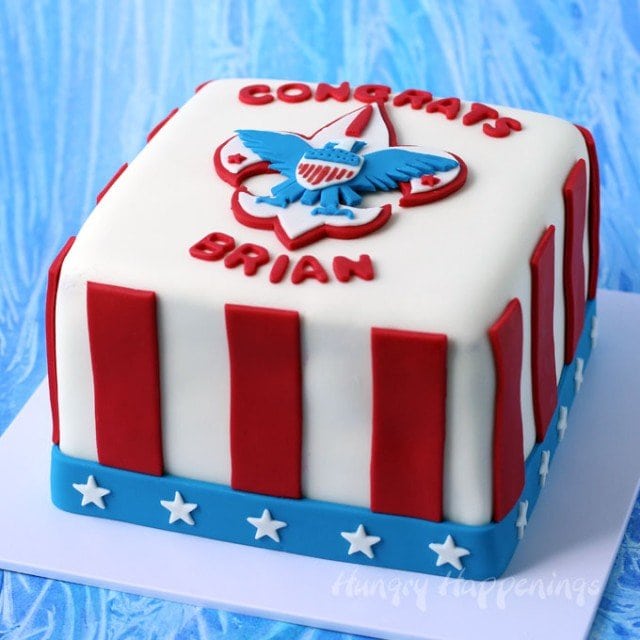 When I set out to create this cake, I knew it had to be as special as the person for whom it was going to be celebrating.

My nephew is one of the most amazing kids I know and I’m not just saying that because he’s related. He truly is special.

Not only is he trustworthy, loyal, helpful, friendly, courteous, kind, obedient, cheerful, thrifty, brave, clean, and reverent, everything a boy scout is meant to be, but he is also intelligent, athletic, handsome, and fun.

He’s on the varsity football and varsity baseball teams, he get’s straight A’s in A.P. Honors classes, and he just became an Eagle Scout.

I was honored to help him celebrate such an amazing achievement and I delighted in seeing him cut into the cake that I created for his big day.

Have you guessed what’s inside the cake yet? Drum roll, please… 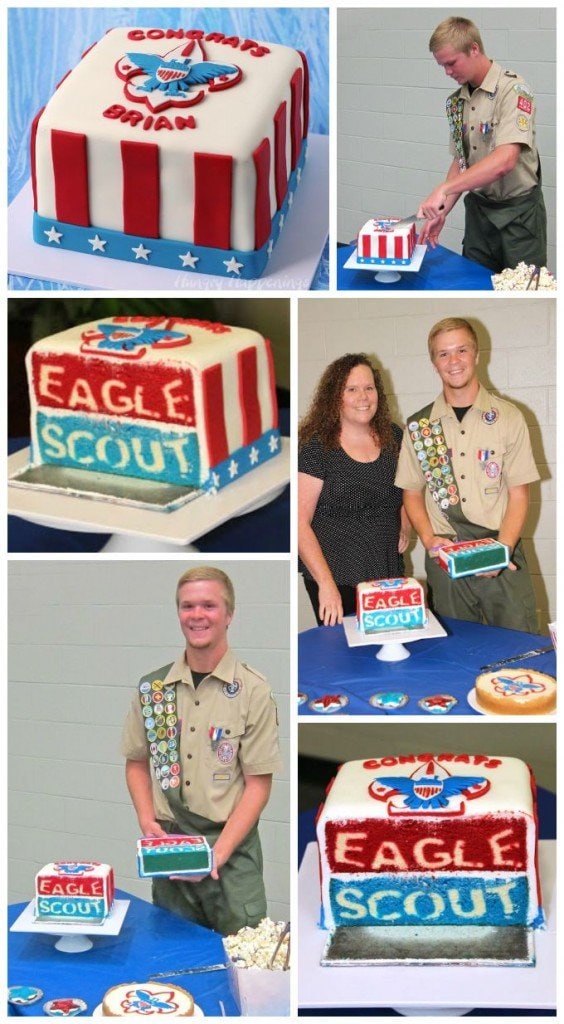 Can you imagine what it was like to see Brian cut into this cake in front of 60 friends and family?

The crowds reaction was enthusiastic, to say the least. 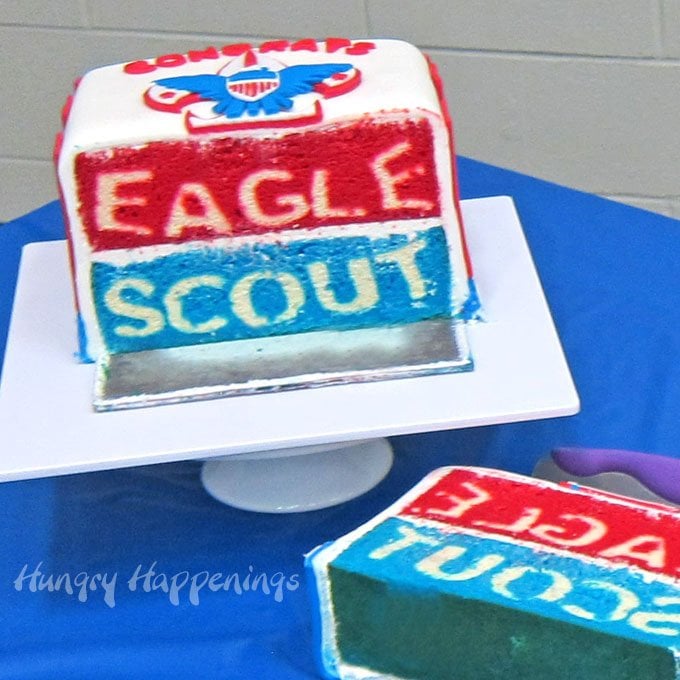 It got even better when we served slices of the cake to everyone. People were coming up asking for the recipe, as well as, for the secret to creating a reveal cake.

They were all shocked to find out that I used cake mixes to create this amazing cake.

Creating a reveal cake is an incredible amount of work, so to reduce the time spent, I use cake mixes, but I doctor them up with sour cream, milk, and  white chocolate pudding. It makes a dense yet moist cake that has a vanilla custard flavor.

This time I even added sour cream to the pound cake which was used for the letters, and I’ll never make it any other way. We’ve been happily eating the scraps that were cut from the letters for days.

There’s nothing more satisfying than serving a cake that looks and tastes incredible. 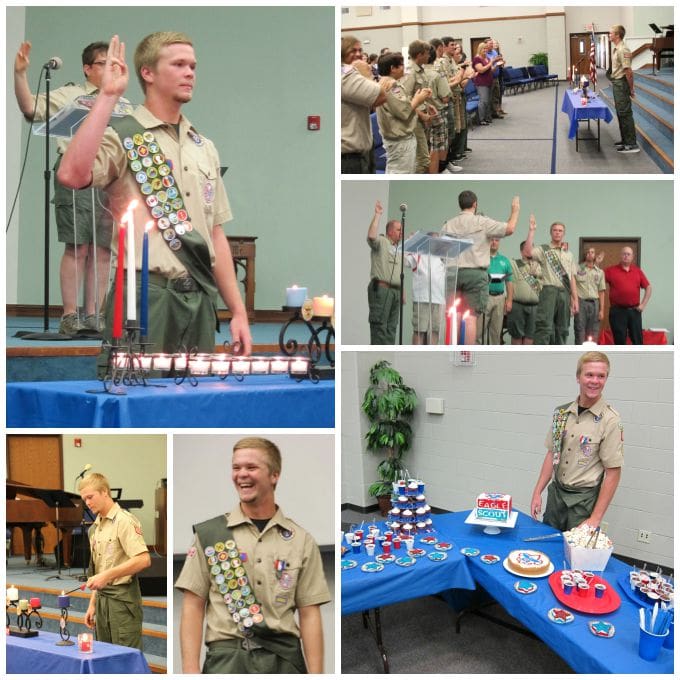 It’s hard to impress teen age boys, so I was happy to see the big smile on Brian’s face when he cut his cake. I knew he was as proud of his aunt as I was of him and his amazing accomplishment.

If you have a son, nephew, grandson or friend who will become an Eagle Scout, make him one of these cakes. He’ll remember it forever.

Of course, this surprise inside technique can be used for just about any occasion.

To create this Eagle Scout Reveal Cake, follow the recipe below to make the amazingly delicious pound cakes for the letters and the exterior red and blue cakes.

If you’d like to see detailed step-by-step instructions for creating a reveal cake like this, click over to my Chocolate and Vanilla “Marry Me?” Reveal Cake tutorial.

When I made this Eagle Scout cake, I used  a metal baking core to get a more evenly baked pound cake. It worked great.

These cakes are really thick and the baking core really helped evenly distribute the heat. Now, I didn’t use it when I baked the red and blue cakes, because I didn’t want a hole in the cake, but I will definitely use it again for the pound cakes. I think the addition of the sour cream in the recipe and using the baking core really made this cake much more moist than usual. 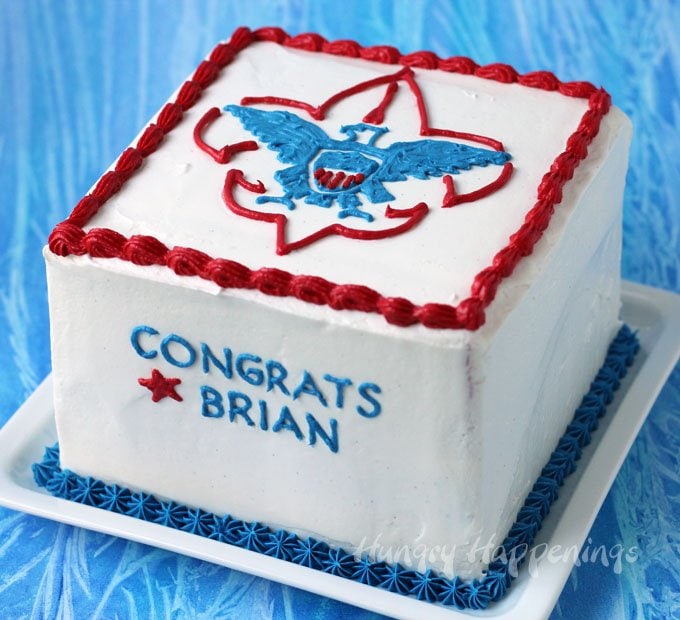 You can decorate the outside of your cake, however you’d like using frosting or fondant.

My cake was actually decorate twice.

Well, it was not my intention, but the nice red, white and blue frosted eagle scout cake, pictured above, which was decorated using a piping gel transfer,  looked great when I went to bed the night before the ceremony. Sadly, when I went to take some pictures of all my desserts the next morning, I realized I had made a huge mistake.

I was so nervous about cutting into the cake to make the big reveal in front of a large crowd of people, that I cut a slice about an inch into the front of the cake and down just far enough to see the tops of the letters. I wanted to make sure they looked right. Then I pushed the cake back together and frosted it.

I didn’t want to cut into the cake and see a cake like this.  I made this cake for a baby shower for my friend and you can see that I tried to put the baby’s birth date in the cake and it didn’t work. It was a bit of a mess. You can’t even tell the bottom cake says 5-1-15.

I would not suggest trying to add small cut outs like the dashes in your cakes. I am not exactly sure why the letters rose up in such a strong curved pattern either. All I know is I used a different cake mix that was a little larger than the others, and it might have just been too much batter in the pans.

I cut into this cake in front of 25 party guests, and while they did “ooh and ahh,” I was disappointed. 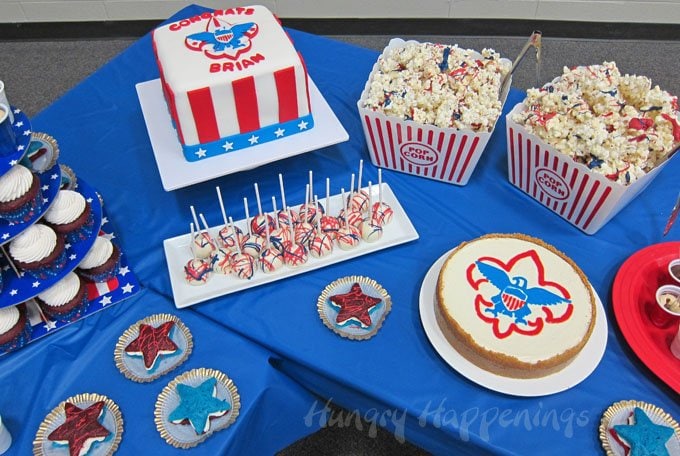 So, when my beautifully decorated eagle scout cake cracked, I had to scrape off the frosting and start over.

In the end, the new cake was far superior to the first cake, but I was exhausted after spending the day before making Red, White and Blue Whoopie Pie Stars, Red Velvet Cupcakes, Chocolate and Dulce de Leche Mousse Cups, Red, White and Blue Cake Pops, an Eagle Scout Cheesecake, and White Chocolate Popcorn.

Thankfully my sister helped the day before and my husband came to my rescue the day of the event.

My husband isn’t handy in the kitchen, but knew my back was hurting so he rolled out a 24 inch piece of fondant to cover this large cake. He’s my hero! 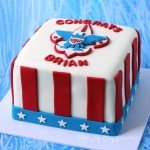 Items needed to create this cake can be found at Amazon.com (commission earned for sales)

Previous Post: « How to Use a Piping Gel Transfer on an Eagle Scout Cheesecake
Next Post: Caramel Apple Cake Roll »