Dress up your Halloween treats this year by making a batch of sweet little Charlie Brown Ghost Brownies.
They are as cute as they are yummy.

How did you feel the first time you saw Charlie Brown get a rock for trick or treat?

Getting decked out in a homemade costume and running through the neighborhood collecting candy made for the most amazing night of my year and the thought of being the kid that even adults ridiculed, broke my heart.

Last weekend, I hung out with Charlie Brown and the rest of the Peanuts Gang at Cedar Point. I attended Bloggy Con 15 and one of the perks of joining about 150 other bloggers to learn how to take our blogs to the next level was getting 3 day passes to the amusement park.

Driving into the park at Halloween was really an experience in and of itself. First, you cross over a bridge with spectacular views of Lake Erie, then you are greeted by Snoopy, Charlie Brown, Linus, and Lucy topiaries all decked out with pumpkins, corn stalks, and hay bales.

This was the perfect time of year for my husband and me to visit Cedar Point. The weather was perfect and the entire park was filled with the most amazing Halloween decorations. You can imagine how excited I was to see them all.

The park really goes all out for this holiday. I was so impressed by the magnitude of the decorations. They were as thrilling as the rides.

During our stay we were able to visit 6 haunted houses and walk through a few outdoor haunts. Our favorite was Zombie High School. It was so cool walking the halls of Zombie High, wandering through the nurse’s office, science lab, and locker rooms, and even visiting the insanely gross cafeteria.

Imagine walking through a cafeteria, tray in hand, being served intestines, and bloody body parts. The whole scene was disgusting, but so incredibly well done that I was in awe.

I tend to walk through haunted houses having a totally different experience than most other guests. While those around me were screaming, I was too busy just taking it all in, admiring the well thought out decorations and room designs, and imagining how I could use the ideas for our own annual Halloween party. Cedar Point does such an incredible job with their haunts. I was seriously impressed.

I was also impressed with the newly renovated Hotel Breakers. Our room was tastefully decorated, really comfortable, and immaculately clean.  The large suite, complete with a living room, kitchenette, bedroom, bathroom, two televisions, a coat closet, and a balcony had a spectacular view of Lake Erie. Every morning we woke to the sound of seagulls and the gentle crashing of the waves on the sandy shore.

My husband spent hours on the balcony while I was at the conference. It was a great place to unwind. Next time we visit the park we definitely want to plan an extra day so we can really enjoy the lake. The resort offers all sorts of water activities and lounge chairs for those who just want to rest and relax at the water’s edge.

The decorations in the two-story lobby area were really spectacular too. They combined a bit of elegance with a bit of gore. I loved it.

I was really busy with the conference during our stay but made sure we had enough time to ride my favorite roller coaster, the Millennium Force, a few times. Flying down the first hill, looking out over Lake Erie, feeling like the car might dip right into the water, then quickly curving to the right is one of the most exhilarating things I’ve ever experienced. I could ride that roller coaster over and over again.

In between riding rides and hanging out with ghosts and goblins, I couldn’t resist doing some shopping. Peanuts characters can be found on just about anything you can imagine. I found some of the cutest t-shirts and just had to buy one with Charlie Brown in his ghost costume. The shirt says “I Got a Rock.” I’ve always had a soft spot in my heart for Charlie Brown in his sheet full of holes.

The t-shirt inspired me to create these cute Charlie Brown Ghost Brownies.

I used Wilton’s Brownie Pops molds to bake my brownies, then covered them in decadent chocolate ganache and draped white modeling chocolate over top so that they looked like ghosts.

Being I was topping the brownies in luscious chocolate ganache, I went the easy route and used a brownie mix knowing the ganache would make them taste decadently good.

When using the silicone mold, be sure to spray some non-stick spray just inside the cavities, then brush it around the mold. I try not to spray the whole mold, as the spray builds up and the silicone gets sticky.

You’ll have excess ganache, You can scoop it back into a bowl, let it sit at room temperature for a few hours until thickened, and use it to make some chocolate truffles.

You can leave the ghosts as they are or you can add some tiny marshmallow hands and a chocolate rock.

I found the tiny little marshmallow hands in the limited-edition boxes of Kellogg’s Apple Jacks with Halloween Skeleton Marshmallows, but you can make them using modeling chocolate if you can’t find the cereal. I attached a tiny chocolate rock to each hand using some melted chocolate.

You can find products needed to create this project on Amazon. (commission earned for sales) 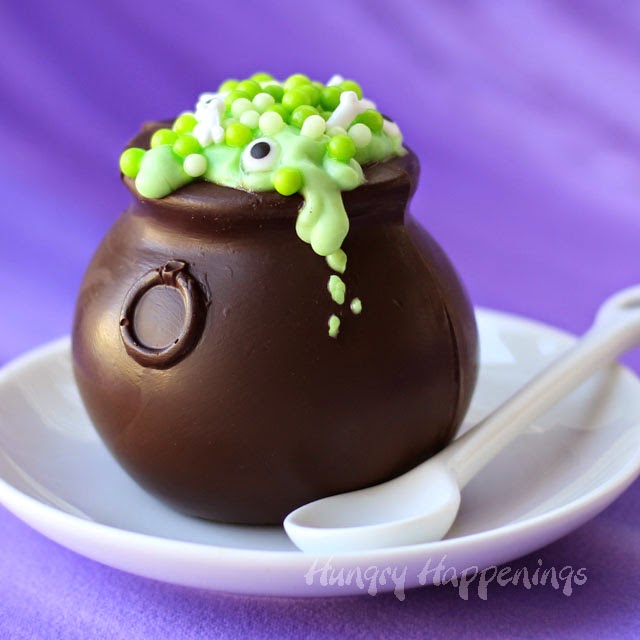 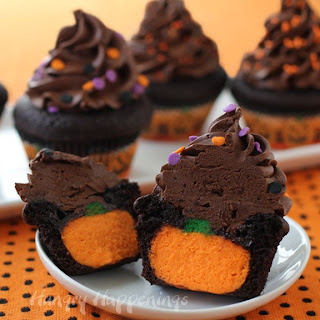 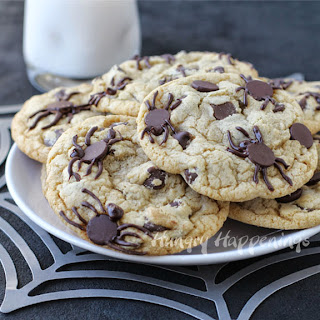