Add some spooky fun to your Halloween celebration with these Creepy Crawler Carnival Games! These games are sure to be a blast and might just scare your pants off. Happy Halloween!

It was so much fun creating all of these games for our Halloween Carnival of the Creepy Crawlers. Some of the games were classic carnival games with a creepy crawler twist like the ring toss pictured above while others were our mad creations like a Fly Swatting game. 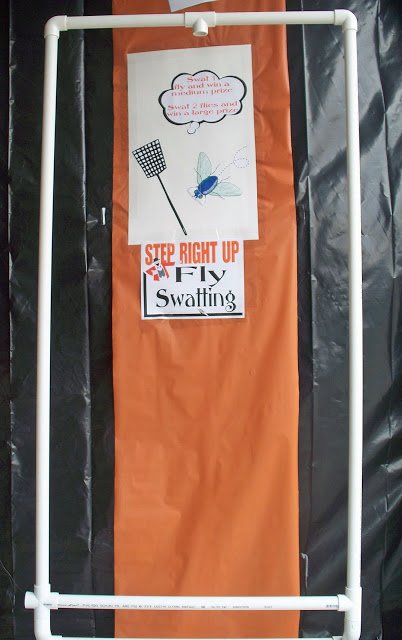 I had an idea to have kids somehow swat at a fly.  My husband thought it would be funny to have the kids use a fly shooter to try to swat a fly. I had never heard of a fly shooter, so I searched on Amazon.com for one.

A Fly Shooter is essentially a plastic gun that has a fly swatter attached to a string. You press down on the trigger and the fly swatter shoots out after a fly.  They are really used to swat flies and they were perfect for our game, so I ordered two. 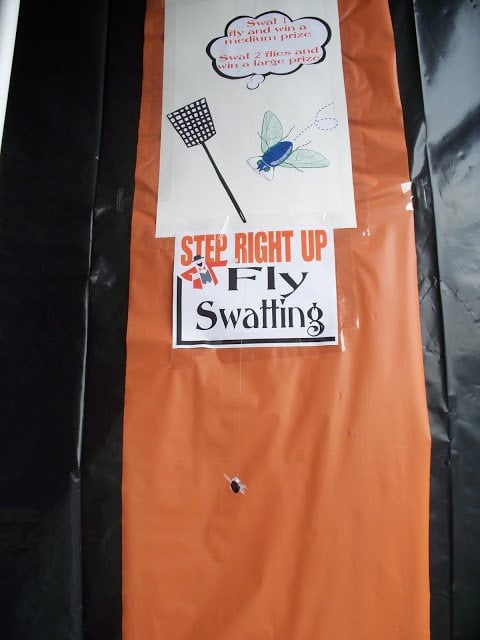 The big challenge was trying to figure out how to get a plastic fly to fly around so the kids could swat at it.  My genius husband built a PVC frame, fed fishing line through the frame, attached it to a handle on one end and a  plastic fly on the other. The person running the game would pull the handle back and forth thereby setting the fly into motion.  The fly could move up and down and all around.   If a small child played the game, the fly didn’t go crazy so he/she could have a chance at swatting the fly.  The older kids were challenged a bit more.  I think the kids really got a kick out of using the fly shooter – I know I did too! 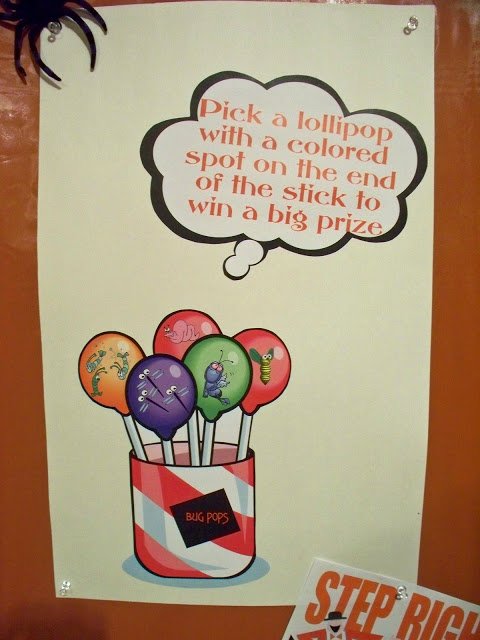 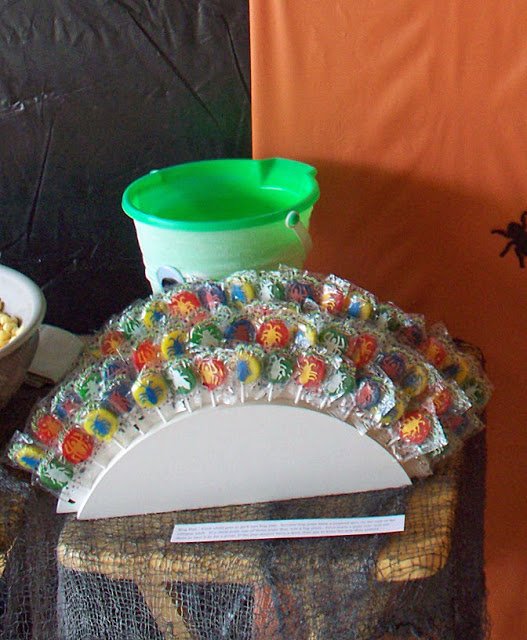 I was fortunate enough to find lollipops that had bugs printed on them and knew exactly what I’d do with them. As a kid we used to go to our church carnival every summer and one of my favorite games involved lollipops. Some had colored dots on the bottom of the stick and if you were lucky enough to pull out one of them, you won a prize. I have several wooden lollipop holders that I use for my chocolate business so I had no trouble setting up the game.  If you want to do this game, you could drill holes into a wooden base or just use a big piece of Styrofoam. Paint dots on the bottoms of a handful of lollipops and randomly place them in the display.  If a child pulls out a lollipop that has a spot, he/she wins a big prize.  If the pop doesn’t have a spot, they get to keep the lollipop.

O.K., this game was a bit out there.  I found a bunch of toy roaches and had to do something with them. Most of the roaches were black, but one was a bright purple. I thought it would be fun to have the kids try to find the purple roach amidst all of the black ones.  I filled a giant bowl with cereal and hid the roaches inside.  The kids would put on a blind fold, reach into the bowl, and grab a roach.  If they found the purple roach, they won a big prize if they picked up a black roach they got a consolation prize. If you make this game, be sure to use a very large bowl and leave room at the top so that the cereal doesn’t spill out all over the floor when the kids reach inside. 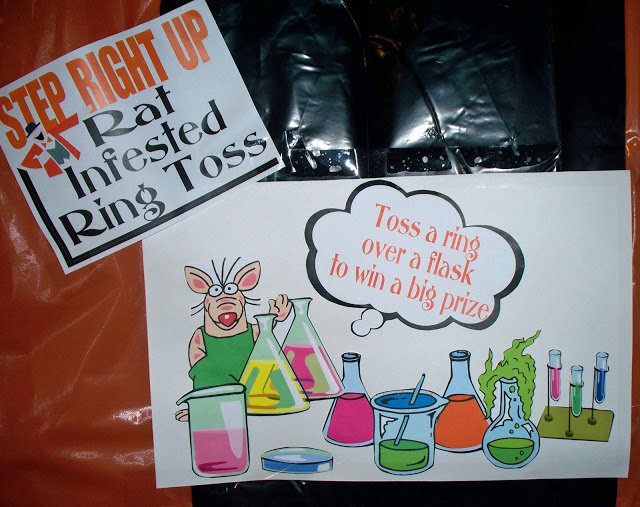 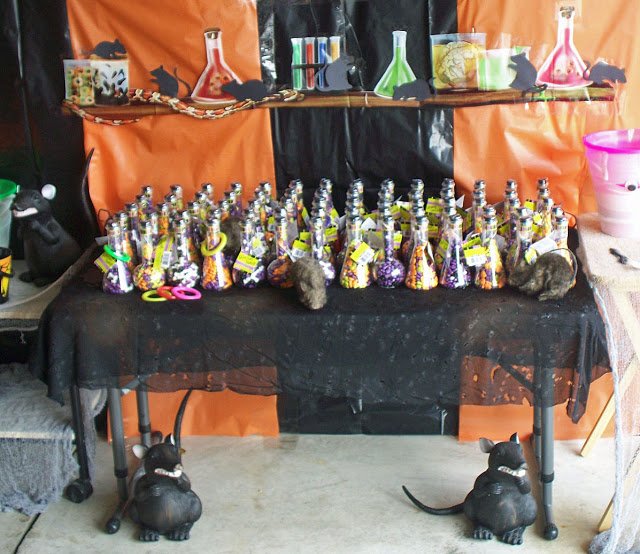 A traditional bottle toss has players throw rings around soda bottles.  I fortunately found plastic laboratory bottles filled with Halloween candies at a really good price.  I found plastic rings at a party supply store the same kind used at real carnivals. Each player got 6 rings and had a chance to toss them onto the bottles. When a player got a ring around a bottle, their prize was the bottle of candy they just captured. At the end of the party, I did have quite a few bottles left over, so I passed them out to some very lucky trick or treaters.

I set up these games the week before our party and I spent a lot of time playing them, especially this one. Many of the adults at the party tried their hand at this game too. 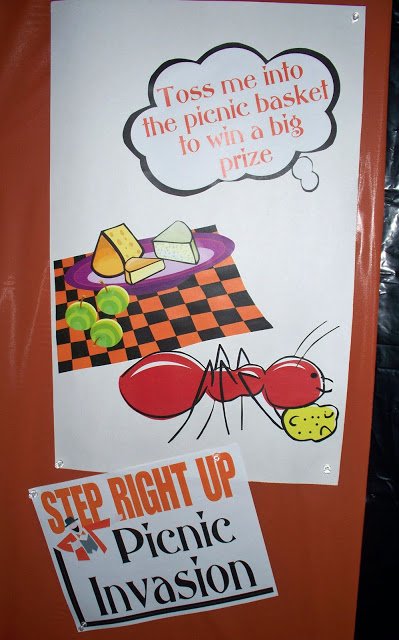 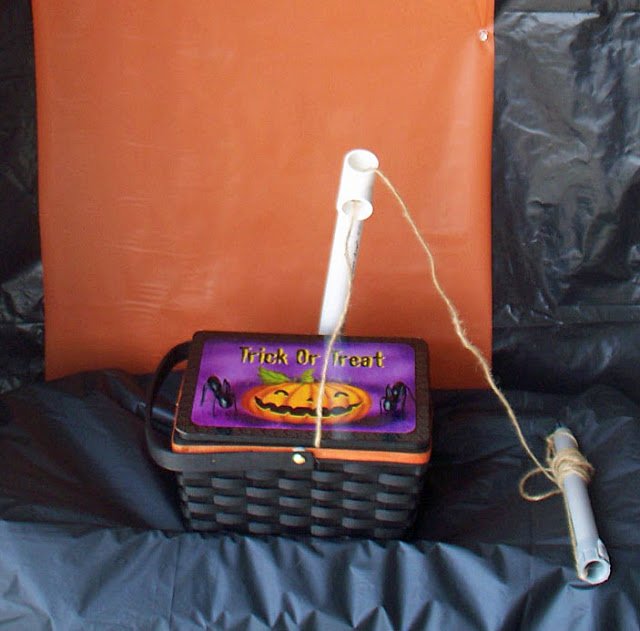 I found huge plastic ants and a Halloween picnic basket and wanted the kids to somehow throw the ants into the basket. Once again my husband had to find a way to make this game a challenge.  I didn’t just want an open picnic basket, I thought it would be more challenging if the lid of the basket opened and closed. So, my husband attached a rope to the inside of the picnic basket lid then attached some PVC pipe to the back of the basket, fed the rope into the pipe and up to another pipe that was used as a handle. The person running the game would move the handle up and down, moving the lid up and down and the kids had to try to throw the ant into the basket.  If they got one in, they won a big prize.

Well, that’s it for my carnival games.  I highly recommend this theme for a party.  The kids had such a great time playing and I enjoyed the challenge of creating the games.  You will need carnival workers to run the games during your event. I was fortunate enough to have a friend’s daughter and her friends help out.  They’ll be back this year helping too.