Everyone loves a good sandwich no matter the occasion! Be festive this year and create a delicious Mardi Gras Muffuletta, but watch out… everyone will be dying to get a bite!

I sat pondering the best way to approach the lofty sandwich filled with loose pieces of olive, celery, and garlic piled atop layers of salami, ham, Capicola, mozzarella, and provolone.

How to take a bite of this gigantic deli fare without loosing all the filling?  I held onto it firmly and smashed it down gently, gripped it in both hands and sunk my teeth into the thick bread that was holding it all together.

The flavors burst in my mouth, I was so surprised how all of these components worked so harmoniously together.  I love ham, enjoy salami now and then, have cheese of some sort everyday, and snack on olives on occasion.  I had never thought to pile them all onto a sandwich, however, until I made my first Muffuletta in the cooking class I attended at the Jekyll Island Hotel.

My job, the morning we made these New Orleans specialties, was to chop celery and slice the Capicola ham which is a traditional Calabrian Italian dry-cured cold cut made from pork shoulder or neck. (Also known as Capocollo, Capicollo or Capicolla, or Coppa.)  Pretty exciting stuff.

I was really annoyed that in this expensive cooking class, which really was more of a cooking experience than a class, I spent my time cutting lunchmeat on a deli slicer and piling it onto trays of sandwiches. Later, when we sat down to eat lunch, I was in a pretty snarly mood feeling like we weren’t really learning anything.

Who can’t pile meat, cheese, and toppings onto a sandwich.  I had no expectations when I grabbed a muffuletta and took my first bite.  My mood immediately transformed.

O.K., so I didn’t really learn any new kitchen skills that morning, but I did have a very positive experience eating something I never would have tasted otherwise. 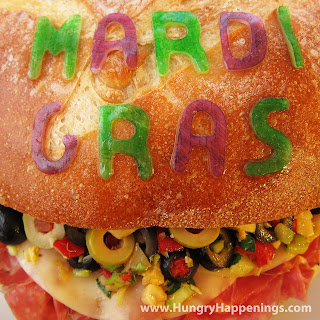 When compiling recipes to use for Mardi Gras, I knew I wanted to include my version of the Muffuletta, but had to figure out how to transform this towering sandwich into a themed Mardi Gras meal. The French Boule, the bread in this sandwich, is rounded on top and has patches of deep golden brown color, as well as, white cracks on it’s surface.  I thought of using the colored milk technique like I used in my Conversation Heart Toast Recipe  to paint directly onto the bread, but thought it would be challenging to paint around all the cracks, bumps, and color gradations.  Then I remembered a technique I used this past Halloween to create pizzas with a colorful shape of melted cheese on top.

I cut a shape out of the mozzarella cheese and brushed it with food coloring then gently melted it on the pizza so the shape was still intact when my party guests put a slice on their plates.  I grabbed my cookie cutters and tried out various Mardi Gras themed shapes to decorate my bread.

Some shapes like the Fleur de Lis looked good, but I realized these cutters were not easily found in craft stores. If you have a mask, crown, or Fleur de Lis cutter, by all means use them to decorate your sandwich. If not, using alphabet cutters is a simple way to add a festive message. I decided to just cut out the words “Mardi Gras,” but you could put any message on your bread. This idea could be used for many other occasions.

Think about all the guys (and gals) that aren’t big sweet eaters and would truly appreciate a giant sandwich instead of a birthday cake.  Having “Happy Birthday” written out in cheese could be a fun surprise. This is a very simple idea that only requires painting food coloring onto cut out cheese then melting it gently onto the bread.

Mardi Gras Muffulettas can be served hot or cold and both are delicious options.  If you choose to serve yours cold, just heat the sandwich in a 200 degree oven until the cheese cut-outs melt just enough to adhere to the bread.  Or, you can do what I did and heat the cheese using a blow dryer (cleaned of all lint.)

I used the lowest setting and heated the cheese for a minute until it glued itself to the bread.  For a hot sandwich just heat in a 375 degree oven for 8-10 minutes to heat the cheese inside the sandwich, remove it from the oven, add the cheese cut-outs on the bread, return it to the oven for 1-2 minutes until the words adhere to the bread, remove and serve. 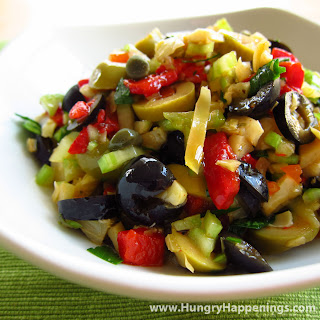 What makes this sandwich unique is the olive salad that is spread onto the bread.  There are so many different versions of this olive salad using green, black, and Kalamata olives and pickled veggies, banana peppers, capers, shallots, garlic, celery,  roasted red peppers, oregano, vinegar, and olive oil.  I chose the ingredients that I liked and added some marinated artichokes to the mix, because I was sure they would blend well with all the other flavors and because I just love them.  I refrigerated the olive salad overnight so that the flavors would all marry together, then I slathered it on my bread and allowed it to sit at room temperature for an hour so that the bread could soak up all the aromatic juices before  piling it high with the meat and cheese.  Well worth the wait.

Serves 2 people with a gargantuan appetite, 4 people who are very hungry, or up to 12 guests at a party who will be piling their plates with other appetizers

Mix all ingredients together in a small bowl.  Cover with plastic wrap and chill for at least two hours, but preferably overnight. Most recipes call for a sprinkling of black pepper – add it you like.

Slice bread in half.  In the top half scoop out about 1/2″ of the bread and fill with olive salad.  Allow to sit at room temperature for 1 hour.  Layer meat and cheese on top of olive salad.  Place bottom half of bread on sandwich and carefully turn sandwich right side up. 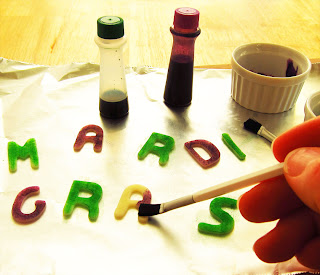 Cut letters or shapes out of the cheese slices. Pour a few drops of coloring in a small bowl.  Use a pastry brush or small clean paintbrush (one that has only been used for food) to paint the coloring onto the cheese.

Cut sandwich into slices and serve. 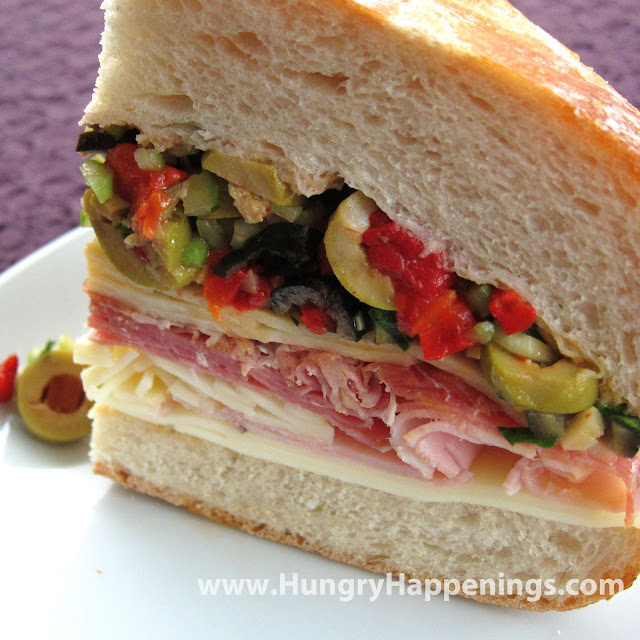