Whenever I think about New Orleans or Cajun food I immediately think of gumbo. If you’re looking for a great gumbo recipe, look no further; try this delicious Mardi Gras Gumbo Topped with Crowns and Masks! 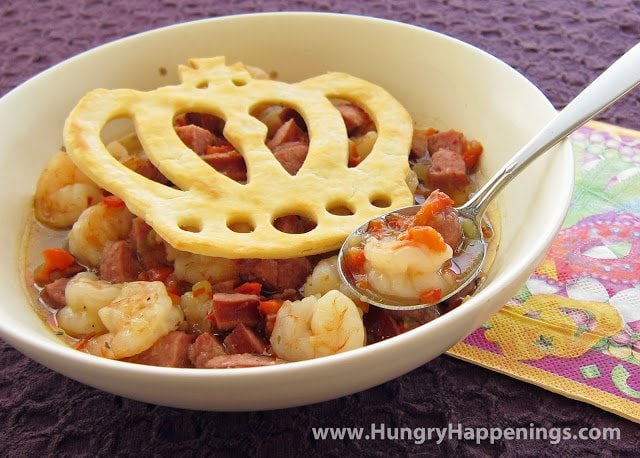 My first experience with making and eating gumbo was uncomfortable, to say the least. My friend Judi and I traveled to Jekyll Island, Georgia to stay in a beautiful hotel and attend a three day cooking class. During the introductory cocktail party, we met the chefs who told us that we’d be making Cajun and Creole food during our stay.

Then the head chef announced that first thing the next morning we would be skinning and butchering a rabbit which would be cooked in a gumbo.  I froze in disbelief.  I know people eat rabbit, but I don’t. I could never get past the fact that my sister had an adorable little bunny rabbit as a pet and I loved that little guy.

I also have incredible guilt over the fact that many years ago my dog, Snickers, went outside, found a rabbit hutch, and killed some baby rabbits all while I sat inside hearing strange squeaking noises.  I couldn’t figure out what was making the noise, but I was busy working on the computer and didn’t get up to investigate.

When I did finally go to get Snickers, I saw baby bunnies blindly trying to find their way around my patio. I ran to the babies to see what I could do and found several were already dead. I grabbed a pair of gloves and picked up one that was struggling and it soon died in my hand.  The emotion of this day still lives inside me.

So when we arrived to cooking class the first morning, although the rabbit was already skinned, I had to leave the room while the butchering took place.  I participated in making the other components of the gumbo and tasted the broth, but didn’t eat the final product. 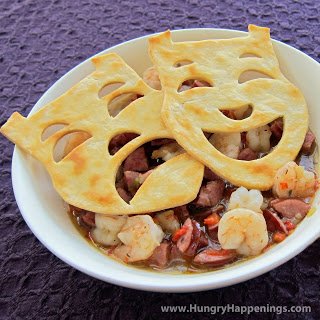 When I began thinking about themed cuisine for Mardi Gras, I was compelled to try my hand at making gumbo, sans rabbit, but knew that I also had to find a recipe that wasn’t incredibly spicy. On a scale of wimp to strong man, when it comes to spicy food, I am a total wimp. Beyond wimp, some would say.  My taste buds scream when spicy hot foods land on them and my stomach screams even louder. I knew that by making gumbo at home I could control the heat.  I ruled out Cajun gumbo  recipes as they are traditionally very spicy.  I decided to try a creole gumbo recipe from America’s Test Kitchen/Cooks Illustrated.  Their gumbo was filled with shrimp and sausage and only 1/4 teaspoon of cayenne pepper.

I chose to use smoked beef sausage for my recipe, but if you like a little more heat, use andouille sausage instead. I also used one small shallot instead of the two onions they call for in the recipe as my husband doesn’t like onions (I know, it makes cooking a challenge.)

They also top their gumbo with parsley and scallions. I left out the scallions and cut down the amount of parsley. I thought more tasted grassy.  I also opted for 1/8 teaspoon of cayenne. There was only a lingering heat in the back of my throat as I ate the gumbo.  Just enough heat for me.

Some people will say that this recipe isn’t a true gumbo because it doesn’t have any okra in it.  I wanted to use okra, as it is an option in the original written recipe, but the okra at my grocery store was spotted black.  I didn’t want old okra ruining my stew, so I didn’t add it.  I do think it would be a good addition as it would help to thicken the broth.  If you want to add it, cut it into 1/4″ pieces and add it when you add the rest of the vegetables.

I have to say the gumbo, as I made it, had a thin but richly flavored broth filled with clam juice and shrimp stock. It was a wonderful background note to the sweet delicate shrimp that paired perfectly with the smokey sausage. I will definitely make it again, adding the okra, but keeping the rest of the recipe as is.

O.K. now that I found a nice gumbo to make, I needed to turn my attention to translating it into a themed recipe.  I toyed with the idea of creating a Mardi Gras gumbo pot pie, but worried that with this recipe, if I baked the gumbo in the oven, I’d end up with overcooked shrimp. I really liked the idea of adding a crust to the gumbo and inspiration hit while I was in Dollar Tree looking at Mardi Gras decorations. I bought the banner, pictured above, knowing that the crown and drama masks could work as stencils that I could use to cut out pie dough. I would bake the shapes of pie dough and simply top my bowls of gumbo with a festive crispy crust.  The addition of the pastry added another layer of flavor to the gumbo and the textural difference was also a nice touch.  If you can’t find a banner, you can purchase a stencil from the craft store, or use cookie cutters to make your pastry toppers.

Make shrimp stock.  Fill a large pot with 4 1/2 cups water. Add the shrimp shells and bring to a boil in over medium-high heat. Reduce the heat to medium-low and simmer for 20 minutes. Then, strain the stock, discarding the shrimp shells, and add clam juice and ice water. Set aside. It is important to complete this step before you make the roux.  Chop the vegetables while the stock is simmering. You will want them prepared before you begin the roux.

Make the roux. Heat vegetable oil in a large heavy-bottomed pan set over medium-high heat for about 1 1/2-2 minutes.  You want the oil to reach about 200 degrees. Reduce heat to medium.  Slowly stir in flour using a wooden spoon.  Continue to stir constantly, working out any lumps, until mixture has a toasty aroma and turns deep reddish brown.  It took me 10 minutes on a gas stove, but the recipe says it can take up to 20 minutes. You MUST stir the roux constantly.  Do not walk away or it may burn and you’ll need to start over.  As you are cooking the roux, if it begins to smoke, remove the pan from the heat and stir constantly before returning it to the heat. I kept tilting the pan, scraping the entire bottom surface, then setting it back on the heat. It worked well.

Add the shallot, bell pepper, celery, garlic, thyme, salt, and cayenne pepper. Cook, stirring frequently, until vegetables soften, 8 to 10 minutes. Pour in the shrimp/clam stock (that has now cooled slightly) in a steady stream, all the while stirring vigorously. Adding the stock slowly will keep the roux from clumping up. Increase the heat to high and bring to a boil.  Then reduce heat to medium-low and add the bay leaves.  Simmer uncovered for 30 minutes, skimming off the foam as it rises to the surface. Add the sausage and continue to simmer for 30 minutes.

Thaw pie crust according to instructions on package.  Unroll. Cut out Mardi Gras shapes using cookie cutters, stencils, or banner cut-outs.  Bake on a parchment lined baking sheet for 4-8 minutes until golden brown.  The time will vary depending on the size of your cut-outs.

Stir in the shrimp and simmer just until it is cooked through, 4-5 minutes. Off heat, stir in the parsley and season with salt, pepper, and more cayenne to taste.  Pour into bowls and top with pastry cut outs. Serve hot. 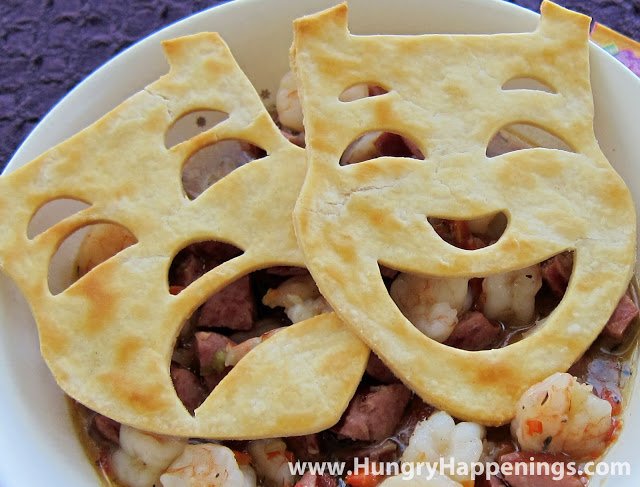